I was browsing through this blog, when I noticed something was missing – consideration of UGC when it comes to sport. You will often see users taking to social media during sporting events as they generate a great emotional response in fans. India played Pakistan in the Cricket World Cup today – a huge rivalry largely due to the two countries’ proximity and history. Plenty were Facebook –ing and tweeting about the game.

I took to both Twitter and Facebook to try and get users to send me pictures of their viewing experiences to convey the atmosphere and buzz surrounding the clash.

Generated By Users tweets during India vs Pakistan

Unsurprisingly, it received no response – so I requested that people send me pictures in tweets using the trending #indvspak and by hashtag -ing towns where I knew there was a large Asian population including Southall, Bradford and Tooting.

Sadly, I didn’t receive any responses on the Generated By Users Twitter account at this stage despite using hashtags to focus my tweets so they can be searched for more easily.

But I did get responses to my Facebook appeal: 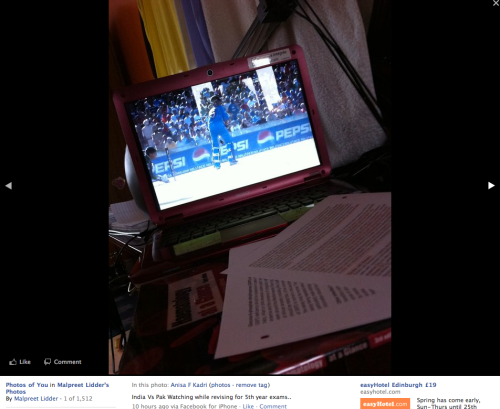 My friend Malpreet probably took time to take this picture and tag me in it because she knows me personally, emphasising the importance of social capital. My family friend Romana also snapped a picture of her viewing experience in Lahore:

My family friend Romana Chohan watching the match in Pakistan

I was conscious that people may be so absorbed by the game that they won’t take time to send little known but obviously awesome blog Generated By Users their pictures. So after the game, I appealed for pictures of places where I knew fans would be celebrating on the streets following India’s win.

Alas, no one would get back to Generated By Users.

I decided to search #southall and came across a man called Jez Humble who had tweeted a picture of the jubilant scenes in this West London town.

Southall post India vs Pakistan in the Cricket World Cup: spot the India flags! Picture taken by @jezhumble on Twitter

Thus, I got some UGC for this post through Twitter after many hours, to convey the excitement surrounding today’s match.

This experiment shows me using Twitter and Facebook to source UGC, and also allowed me to demonstrate knowledge of the Creative Commons Licence. This essentially gives the go ahead for an organisation/person to use other people’s pictures for free with their permission – always remember to credit them!

If you enjoyed this post, be sure to check out bloggers’ your2pence’s attempt to get in touch with people on the ground in Japan. They did good!